Having 33 points between the two hands doesn't guarantee you'll make a slam but you'll make much more often than not. Some hands with fewer than 33 points will still make slam but you'll probably need something to make up for your lack of points - perhaps a long suit or a great trump fit with a shortage in a side suit.

You might also need a suit to break nicely or perhaps even a finesse to work. If you can get used to the idea that very few slams you bid will be 100% guaranteed and, instead, aim to bid slams that have a better than 50% chance of making you'll be better off in the long run than the overly cautious players. And you'll have more fun than they will. 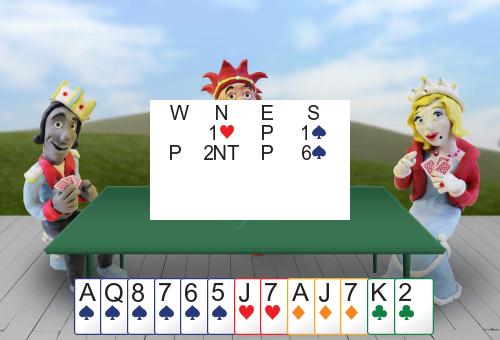 1♠ is a change of suit so it's forcing. That means North can't pass and is expected to describe his hand further which he does, in this case, with 2NT. That 2NT bid is a limit bid showing 18-19 points and a balanced hand. South has 15 high card points with good shape together with North's 18-19 making 33-34 between the two hands. North must have at least 2 spades for the 2NT bid so South can be sure of an 8 card trump fit. 33 points and 8 trumps.

It's tempting to ask for aces with Blackwood or Gerber to get you to slam but often a simple approach is all you need.