When you're considering bidding a slam, which aces you hold can be just as important as what aces you hold. Cue bidding is a method of showing which aces and kings your side has. It can also be used to show singletons and void.

Blackwood and Roman Key Card Blackwood are very good conventions for ensuring that your partnership has sufficient aces for the level of slam you are about to play, whether small or grand. However, there are many hands when asking for aces does not give you the answer you need and where you might still fail in a small slam even with only one ace missing.

The most typical hand type when Blackwood lets you down is where you are missing AK of the same suit. While Gerber, not the recommended method of ace asking for suit contracts, may enable you to pull up at the 5 level in such circumstances, Blackwood certainly does not.

Another problem with most ace ask methods is when the asker is void in a suit. The asker needs not only to know the number of aces held but in which suits. The very useful solution to these problems is the use of cue-bidding.

Cue bidding can be used very comfortably with splinter bids or with bidding after the Jacoby 2NT response though the examples which follow involve very natural bidding.

What is a cue bid in bridge?

A cue-bid shows one control in the suit bid. A control is one of the following:

In order to make a cue bid, a trump suit needs to be agreed first. Normally, the fit is established clearly though there are situations where the fit is implied. An example of the latter will be shown later.

If you have two controls in the same suit (e.g. AK43 or singleton A), you need to bid the suit twice to confirm the second control.

Here is a cue-bidding sequence: 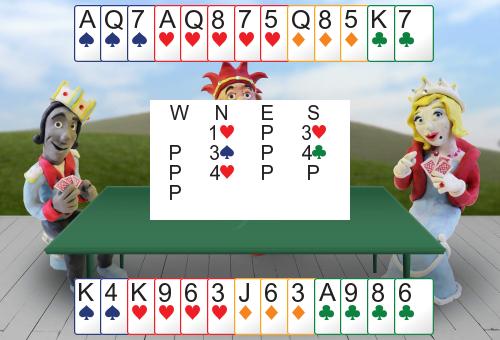 3♥ agrees hearts as trumps. West bids 3♠ to show the ♠A and East 4♣ to show the ♣A. When you bypass a suit, you deny the ability to cue that suit. This information can be as useful as an actual cue-bid itself.

You can play that you cue-bid aces or voids before kings or singletons (i.e. if you only hold the king, you must by-pass the suit on the first round of bidding). This is not particularly efficient and it is recommended that the bid of a side-suit shows first or second round.

Using this approach in the above sequence, South must pass 4♥ as by by-passing diamonds, North has denied holding any control in that suit. Slam cannot be made were the defence to lead diamonds.

Note that the bid of the agreed trump suit is not a cue-bid but a statement that slam may not be a good idea. The partner does not have to pass but has to have a good hand to disregard the warning. With no control in diamonds, South heeds NorthÃ¢â‚¬â„¢s warning and passes 4♥. If there is a 5-2 diamond break, 4♥ will be the limit as the defence may be able to get a third round diamond ruff. 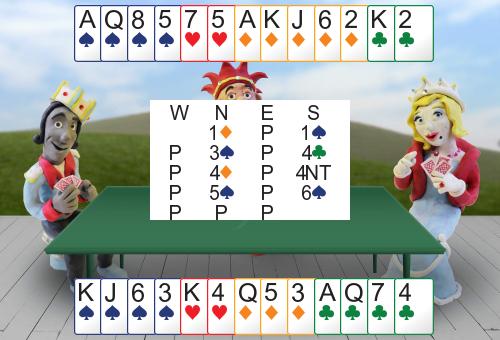 3♠ agreed trumps after which South showed a control in clubs and North one in diamonds. Note that it was not compulsory for South to bid 4♣. If for instance South held the above hand but with small cards instead of ♠K and ♦Q (i.e. a 10 count), they would just bid 4♠ after 3♠. The 4♣ cue told partner that South had enough high-card strength to at least be interested in slam (15 opposite 15-17 for the raise to 3♠).

With at least an ace or king in every suit, South could use Blackwood, in this case Roman Key Card. 5♠ showed 2 of the 5 key cards and the ♠Q. With one key card missing, South would be satisfied to bid just the small slam in spades.

Here is an example of where cue-bidding starts without support actually being shown. 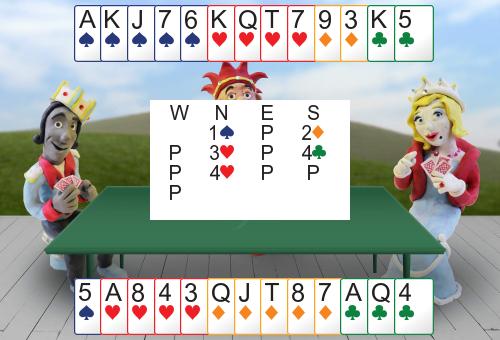 North's jump to 3♥ shows an above average opener (16+ hcp) after their partner changed the suit at the two level. South likes hearts too but, without cue-bidding, can only show support by raising to 4♥ which North could pass, unaware of the strength opposite, or by using Blackwood. As you can see, slam cannot be made because SouthÃ¢â‚¬â„¢s diamonds are not good enough. Were trumps to break 4-1, the 5 level may be too high.

So, why is 4♣ a cue-bid rather than a natural suit? North has shown at least 9 cards in 2 suits and is very unlikely to have 4 clubs as well. Such a change of suit at the 4 level is very likely a cue-bid, even 4♦ by South in the above auction. If South had really long diamonds, they could bid 5♦. 4♦, like 4♣, would have been a cue-bid. When North bids 4♥, South can pass aware of the diamond problem.

There are players who prefer to gamble they are not missing AK of a suit and "punt" the slam. Sometimes they might be lucky as the suit is not led at trick one. The better the defenders, the less likely this will be. One drawback to both Blackwood and cue-bidding is where there is a deep unavoidable loser in a suit. Look at the following pair of hands:

The partnership has all the aces and three kings, excellent trumps whether diamonds or hearts are trumps but two inescapable black suit losers in a slam. This shows that neither cue-bidding nor ace asking has all the answers. Nevertheless, a combination of these two methods, along with splinter (shortage showing when you have a fit) bidding will dramatically improve your slam success rate, both in the ones you bid and the ones you, correctly, stay out of.

Blackwood would not help North on the following hand which requires North to identify that South's honours are in the minors, not spades: 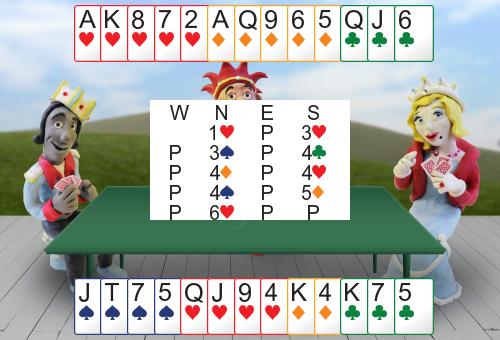 Summary of the main points in cue-bidding

1. You must have agreed a suit as trumps or implied the fit. (You cannot cue-bid in no trumps or without such a fit/implied fit.)

2. The bid of a side suit shows the ace or king, maybe singleton or void, in the suit bid and denies any of these holdings in any suits bypassed. Bidding the suit twice shows two controls in that suit.

3. You do not cue-bid in trumps. The bid of the trump suit is a warning not to continue any higher.

4. It is better to cue-bid first and second round controls at the same time and then use a form of Blackwood to determine whether the control is first or second round.

So, cue away to success.