East has opened 1♠ and we have to decide what to do in the overcall position. 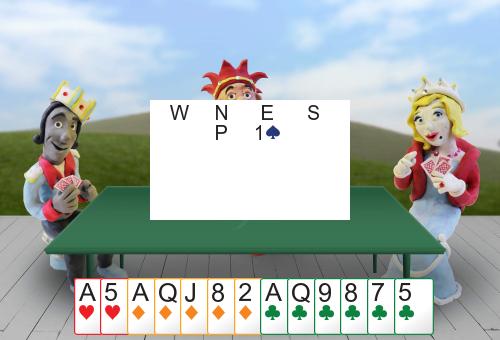 We could bid 2♣ but the hands are a little bit strong for that. An overcall normally shows a maximum of about 15, 16, maybe 17 points and we have 17, but really great shape. So I'm not so keen on that. And if I bid 2♣, it's going to be hard to show that diamond suit later. I could bid two 2♦, but that seems no better, because I've got all those clubs.

Double is an option, but I've only got those two hearts. And if I double partner always bids my short suit so partner bids hearts and that's not so good either.

This is a good hand to use what's called the Unusual 2NT overcall. It's unusual because if I had a strong hand, I would double. 1NT Trump would be a strong, balanced hand. So what's 2NT? That would be unusual. The unusual 2NT! And a jump to 2NT as an overcall shows two five cards suits, and it's the lower two unbid suits. So in this case, that's clubs and diamonds. So I can 2NT here. I've shown at least five clubs and five diamonds. And I don't care, which one partner bids.