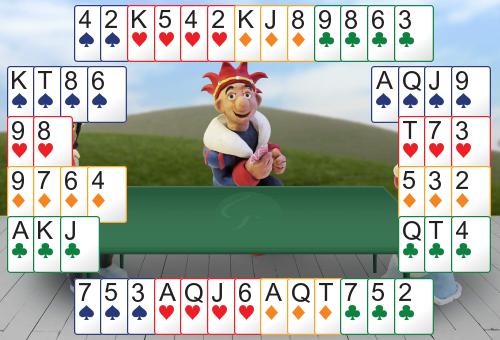 Now count how many trumps each side has in their best fit. North South have 8 hearts and East West have 8 spades. The number of North South's trumps plus the number of East West's trumps = 16.

On this second example, the only change from the previous hand is that West has the ♦A.

Now North South will only make 1♥. However, East West will now make 3♠. That is, North South make only 7 tricks, but East West make 9 tricks. The total number of tricks therefore remains the same = 16, and the law of total tricks still holds. 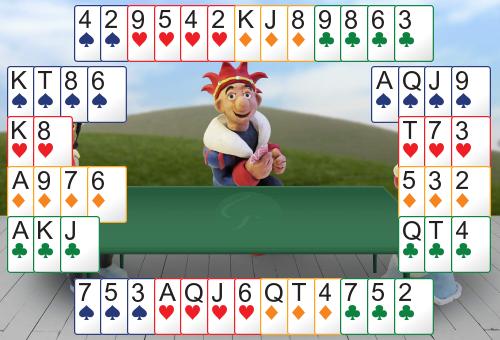 Game for East West. The total number of tricks is still 16.

How to use the Law of Total Tricks

If you can find a profitable sacrifice you might not need to make your contract in order to get a good score.

LTT can help you to decide how high to bid in a competitive auction, that is when both sides are bidding.

Other hand evaluation techniques will help you to decide if you'll make your contract whereas the law help you decide whether the contract you bid to will be a good sacrifice.

The better your trump fit, the higher you should be competing. 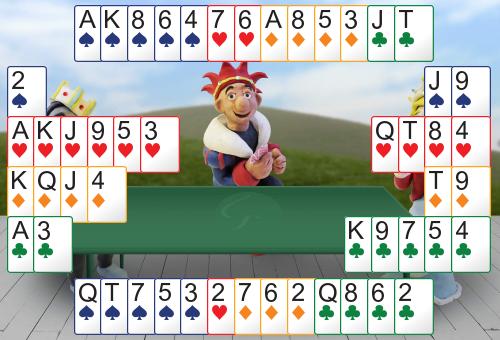 East West can make 4♥ and North South are only 1 down in 4♠. It's better for North and South to give East and West 100 points for going down our way rather than 620 (or 420) for letting them make game.

Push your opponents off their level 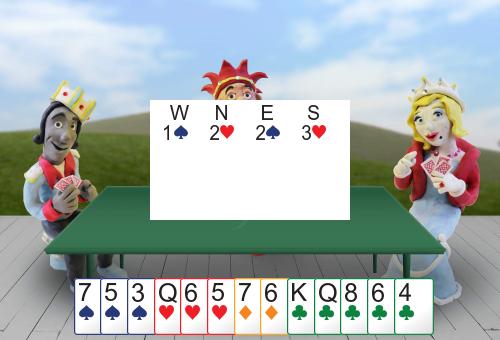 North has promised a 5 card heart suit and you have 3 card support so it looks like 8 tricks all you should be competing for. However, East and West have an 8 card fit and they are trying to play at the 2-level. You can bid 3♥ to push them out of their comfort level. 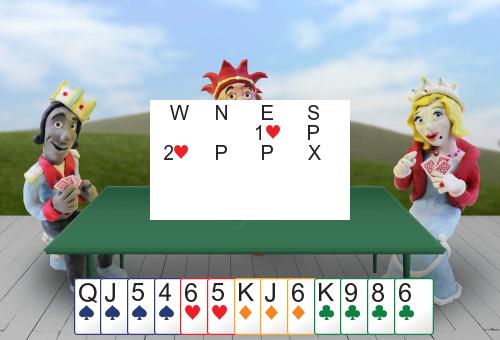 Even though you weren't strong enough to double on the first round, you can't afford to let East and West play at the 2-level when they have an 8-card heart fit. Your double when the bidding is about to die out is called a balancing double and partner will know to bid. Maybe you'll make a contract your way, maybe it will be a good sacrifice or maybe the opposition will bid 1 more and go down.

LTT can also help you to decide when to make a penalty double.

On this next hand you have an 8 card spade fit and plenty of points but although you might make 4♠ you're probably better off making a penalty double of their 4♥ contract. Each side appears to have a trump fit but not a great trump fit. 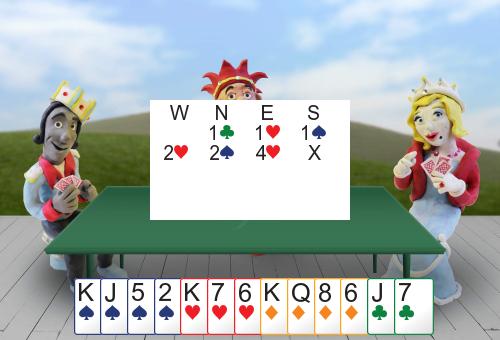 Counting points vs Law of Total Tricks in bridge

The law of total tricks in bridge is not a replacement for counting high card points or the losing trick count. Each technique is used in a different bidding situation.

The Law of Total Tricks in bridge is only useful in competitive auctions. It won't help you to decide if a contract will make. LTT is used to determine whether it is worth bidding on, possibly to sacrifice, or whether it would be better to defend.

LTT is a well known theory amongst all top players and teachers and well worth studying further, even if there are different views on it's absolute accuracy.

Jean-René Vernes was the first bridge player to write about the Law of Total Tricks but it became really well known in 1993 with the publication of a book by Larry Cohen called "To Bid or Not to Bid" and that's still a great book.

Mike Lawrence isn't such a fan of the Law. On newbridgelaw.com he calls the whole thing a coincidence or side effect and along with being a World Champion bridge player, Mike Lawrence is a very fine author. However even he agrees that the Law has some good points.

Whether it becomes your go-to bidding strategy in competitive auctions or just one of the things you use to help your judgement, we think you'll be a better bridge player if you understand the Law of Total Tricks.