How to play bridge

Bridge is a great! In this lesson I'll show you how to play. If you can already play you might be interested in learning how to score or duplicate bridge.

Bridge is a card game for four players. The players are commonly referred to as North and South who play against East and West. 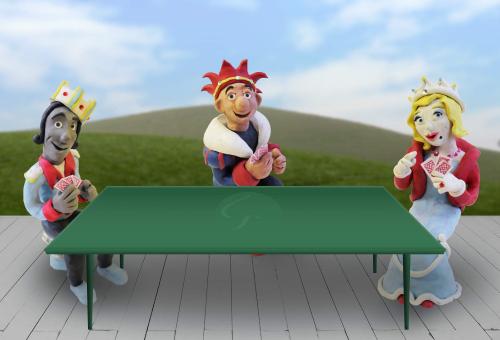 Today I'll be playing at skybridgeclub.com and I'll be sitting South. The computer plays for the other three players. North up there is my partner and our opponents, West and East are on my left and right.

The Auction - pick a suit!

There is an auction at the start of every hand. During the auction, players make bids to tell their partner what suit they like best.

The terminology for bidding is number + suit. For example, 1♥ or 4♠.

For now, pick a suit you like and bid that - you'll do fine! 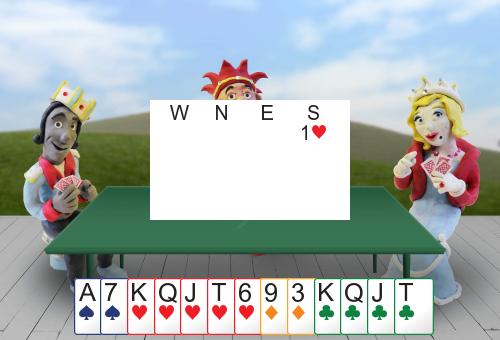 Each bid must either be for a greater number of tricks or a higher ranking trump suit, so we need to know the rank of the suits. 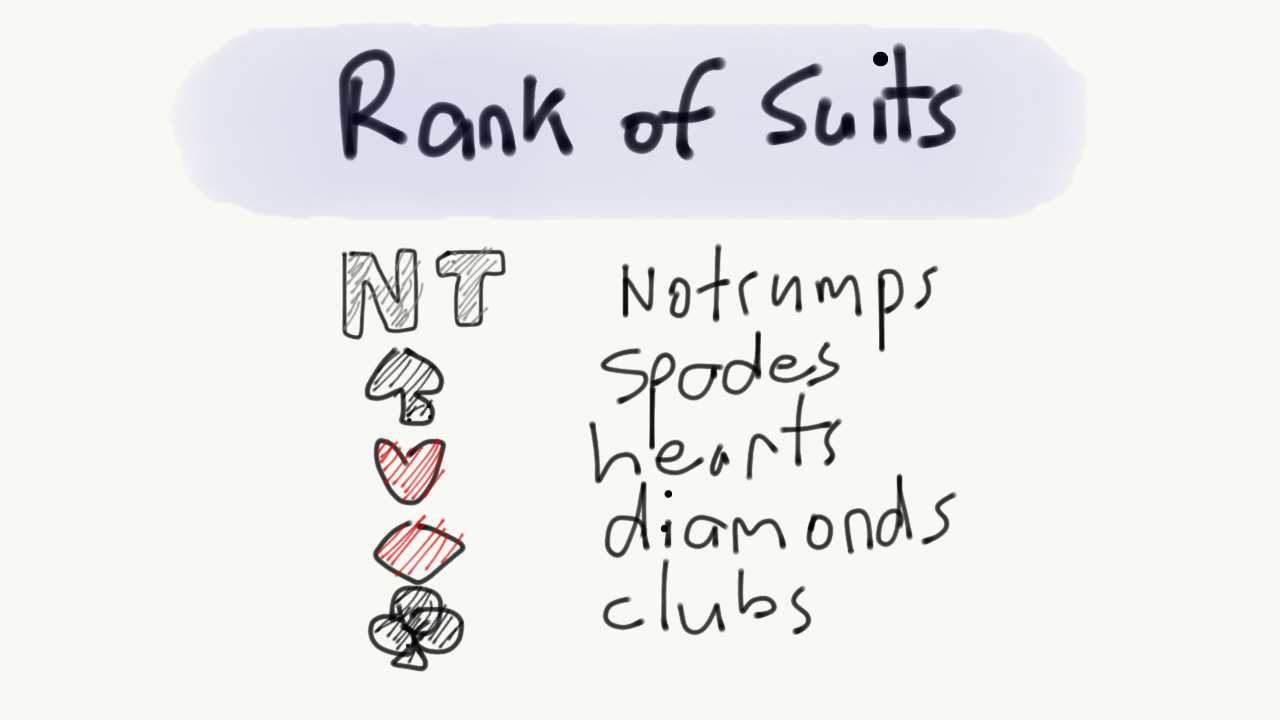 After your 1♥ bid, if West wants to bid spades, he can bid 1♠ because spades rank higher than hearts but if he wanted to bid clubs he'd have to bid 2♣. 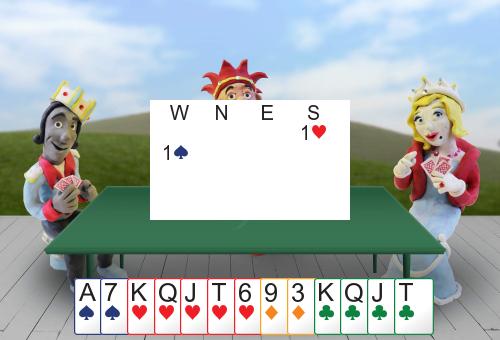 West has made spades the trump suit.

You can either bid... 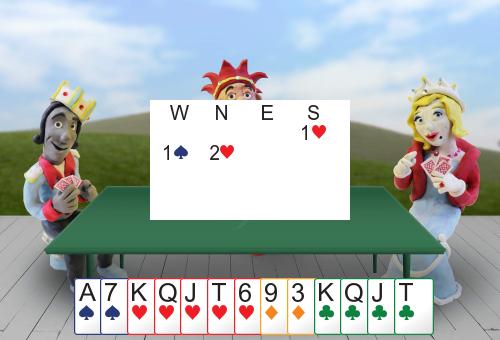 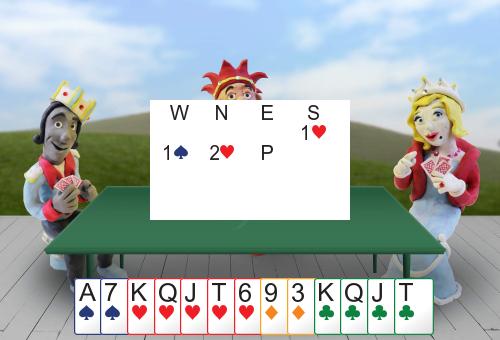 East has nothing to say.

After three passes in a row the auction is over. 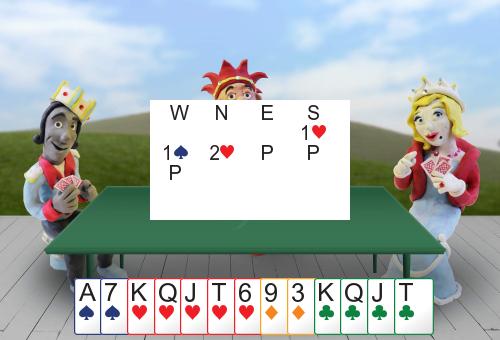 2♥ was the last bid so hearts become the 'trump' suit and we'll see what that means very soon. Notice, too, that South bid the hearts first. That means, on this hand, South is called the 'declarer'.

After the auction is finished, the person to the left of declarer makes the opening lead. 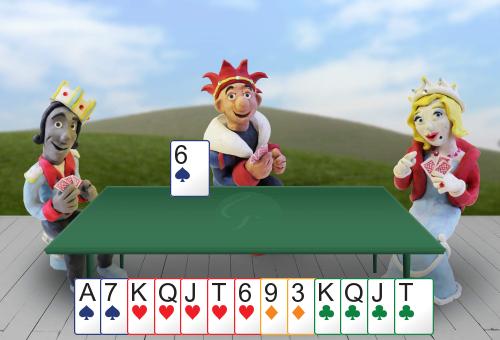 Declarer's partner is called the dummy. Dummy's cards are placed face up on the table and declarer takes control of that hand, too. 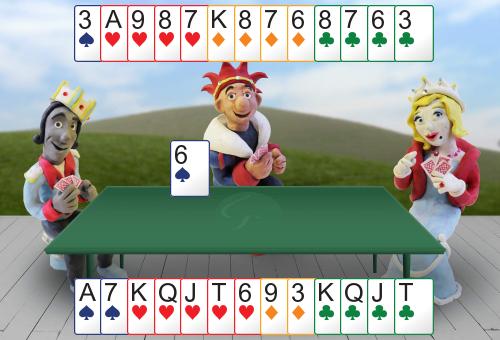 North is the dummy on this hand.

In clockwise rotation, everyone plays a card and if possible must 'follow suit', which means playing a card of the same suit as the one led. If you can't follow suit any card is ok. 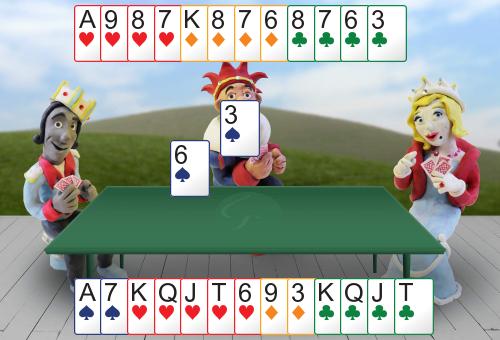 North follows suit with the ♠3.

Each round of four cards is called a trick. The highest card of the suit led normally wins the trick but sometimes that trump suit that I mentioned comes into play. If anyone plays a trump then the highest trump card played wins the trick. 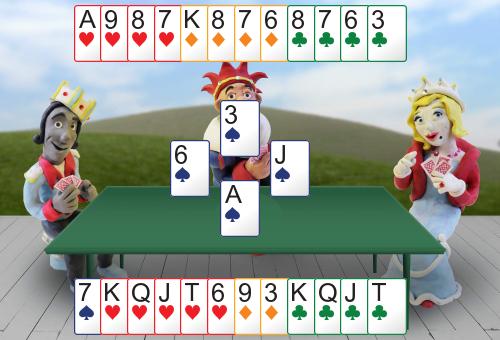 South wins the trick with the ♠A.

The person who won the trick plays the first card to the next trick.

Declarer tries to win the bid plus another 6 tricks. 2♥ = 2 + 6 (8) tricks. But it often doesn't matter! You can win by losing and preventing the opposition from making their own contract. Your task is simply to make as many tricks as you can.

That's it! Bridge is a lot of fun and there are many bidding and play strategies you can learn to improve your game.

If you'd like to try bridge yourself then you'll probably find there is a bridge club near you and most clubs run beginners classes to help you get started. I just went to google and typed in 'bridge club near me' and up popped a couple of clubs close by.

There are many places you can play online, too. skybridgeclub.com is a good place to start because you can play against the computer until you get the hang of things.

Have fun and I'll see you at the table!