A finesse in bridge is a card play technique that can sometimes allow you to win a trick with a card that is not the highest one remaining in the suit. A finesse normally works by leading a low card from one hand, waiting to see what card second hand plays and then playing a high but, not the highest, card from the third hand hoping that fourth hand can't beat that card.

In all the following examples you are in a 6NT slam contract but finessing is technique that works in suit contracts or notrumps. 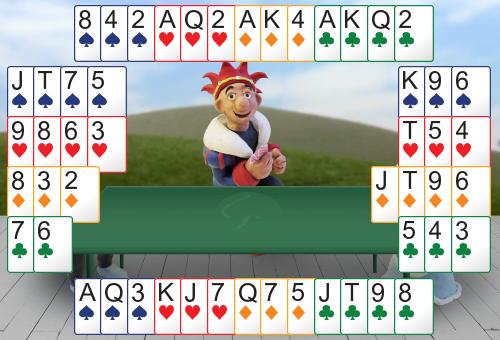 You are North and East leads a diamond against your contract of 6NT. You can count four sure club tricks, three diamond tricks and three heart tricks and therefore need two spade tricks to make the contract.

Play a low spade from the North hand and wait to see what East plays. If East plays low you play the ♠Q. West can't beat that card and you still have the ♠A for your 12th trick.

How do you know that East has the ♠K? You don't! You just have to hope. But if West has the ♠K then there's almost no way to make your contract so a winning finesse is all you can hope for.

Low to an honour 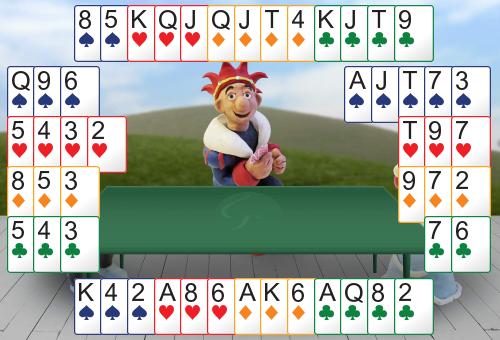 This time you are South in a contract of 6NT and West leads a diamond. This time you have four sure club tricks, three diamond tricks and four heart tricks. You need one spade trick.

Now you need to hope that East has the ♠A. Lead a low spade from the North hand. If East plays low you can play your ♠K and win the trick. If East plays the ♠A you play low from the South hand and your ♠K will take a trick later. 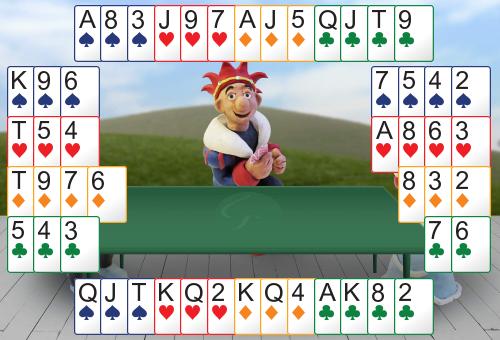 Again you are South in 6NT and West leads a diamond. You can count four club winners, three in dimaonds, three in heart so you need three spade tricks to make your contract.

This time you have the QJT sequence in spades so you can take a running finesse. Play the ♠Q from the South hand. If West plays low you also play low from the North hand. West's ♠K is trapped! 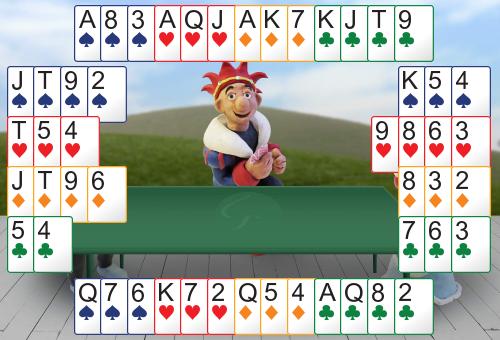 In our final example you are North in 6NT and this time you will need two spade tricks to make your contract.

Be careful with this one! Many players will try a running finesse in this situation by playing the ♠Q and hoping the West has the ♠K.

However, if East has the ♠K your ♠Q will lose and if West has the ♠Q he will simply cover the ♠Q, covering an honour with an honour, with the ♠K forcing you to use your ♠A. Either way you will only make 1 spade trick unless West makes the mistake of not covering your ♠Q.

To win two spade tricks this time you need to play a low spade from the North hand, hoping that East has the ♠K. If East plays low, you play the ♠Q. If East plays the ♠K your ♠Q will make a trick later.

Imagine you hold this spade suit as declarer. 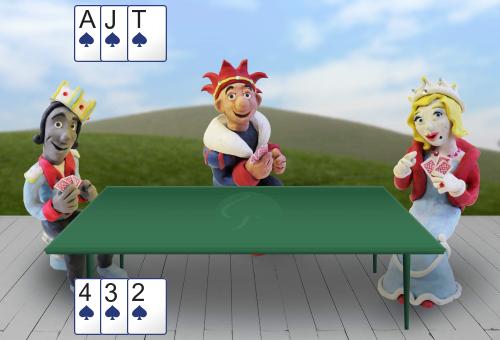 You've always got 1 trick in the suit and you'll never make 3. How do you give yourself the best chance to make 2 tricks?