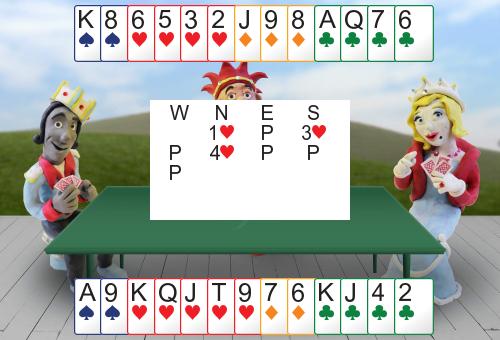 Can't do much about those two diamond tricks, and I can ruff the third one one. Ruff just means trump, ruff means to play a trump. So, I'm ruffing with the ♥9. Now what?

Well, those hearts are pretty good, but I am missing the ace. But look at those clubs, ace, king, queen, jack of clubs. That looks like four tricks. So, let's say I just take those clubs now because they're all winners, ace, king, great, queen, good. Oops! When I play the ♣Q, it gets ruffed.

Let me play the hand again. Still in 4♥. And nothing I can do about those first two tricks. And I can ruff that diamond. Now, this time I'm going to draw trumps. And drawing trumps means taking the trumps out of the opposition's hand. It doesn't matter that I have to lose the ace of hearts, so I'm not worried about that card, but I don't want to lose tricks to the little hearts in the opposition hands. So, I started with five hearts in the South hand. There were four in the North hand. So, that means we started with nine hearts between the two hands. So, the opposition started with four hearts. So, I've gotta keep playing hearts until their four hearts are gone. And again, it doesn't matter that I have to lose the lead here.

When all their hearts are gone it's safe for me to play the ace, king, queen of clubs, because they had no more trumps left. And this time I make 10 tricks because I drew trumps before trying to play that club suit.